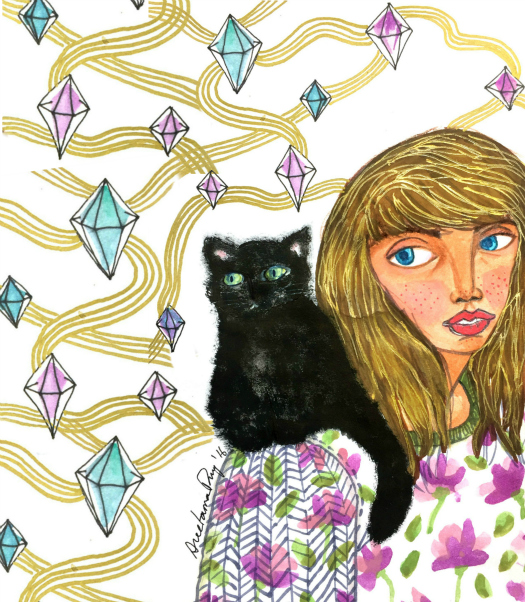 Some people think that adopting little babies or furbabies is a favor to them. Because they need to be saved. Because it’s charity that will earn people brownie points with Sky Daddy. Like my friend, Ananya, who adopted a “rescue kitty”.

“I just wanted to do something charitable, you know? I really needed to feel good about myself”, she said.

She was going through a divorce, had been made redundant at her job and had just lost a chunk of her social circle due to this change of circumstance. She was feeling worthless and hadn’t laughed at anything for a very long time. In her heart, she believed she never would. She had even considered ending her life.

On kitty’s first night, she followed Ananya into the bathroom and stared at her while she sat down to pee. Then kitty tried to get into the panties around Ananya’s ankles and got horribly tangled and distressed. Ananya heard someone laughing — and a few seconds later found herself shaking, her belly jiggling softly, her head thrown back. She was feeling happy. Not amused or silly. But red-faced belly-shaking happy. Kitty wanted to be with her, even when she was peeing. Kitty needed her to free him from a panty tangle. Kitty was upset if she went out and seemed like he had missed her every moment she was gone.

She named kitty Magic. Her magical furry friend who made her feel needed and loved and followed her around like she was the most important person in the world. A magical “rescue cat”, who saved her life. 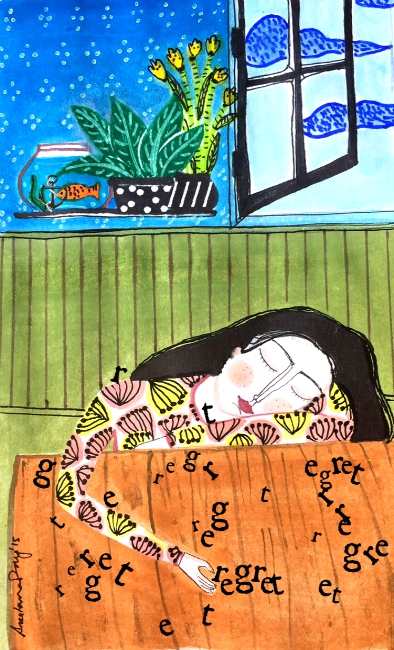 Sometimes, a small regret comes flying into my mind and very soon I am sitting in a pile of regrets, sorting out the big and small. Piecing together the tiny things that led to the big regret. Trying to shift the pieces around and see if it could spell something else, like “choice” or “destiny” but it doesn’t.

Has this ever happened to you?

“Rose-colored glasses are never made in bifocals, because nobody wants to read the small print in dreams.”

Life is an effing cactus garden. It looks nice, some times is has pretty colorful flowers, it’s meaty and rather independent about which direction it wants to go.

But it’s also hella prickly and sometimes it hurts like a mofo.

On my 25th birthday, the girls and I went partying all night. We hopped clubs and danced like we weren’t wearing heels. We started drinking at 9, stopped at midnight to eat greasy biryani at a midnight buffet, drank some more, got in a brawl with the police, stopped at a sandwich joint at 4 am and finally came back home at 5. We then posed in the lawn outside my home and took a photo. We looked a bit off but we looked good. We even posted that picture on Facebook.

Cut to 2015; partying “all night” ends at 2 pm, with one weepy sad drunk, one feeling sick, one throwing up on every free surface and one becoming suicidal-y depressed. We took a photo, but we had to delete it right there and then.

Live fast, die young. That was my motto, until now, when it’s too late to die young. I would live fast, but it gives me acid reflux. 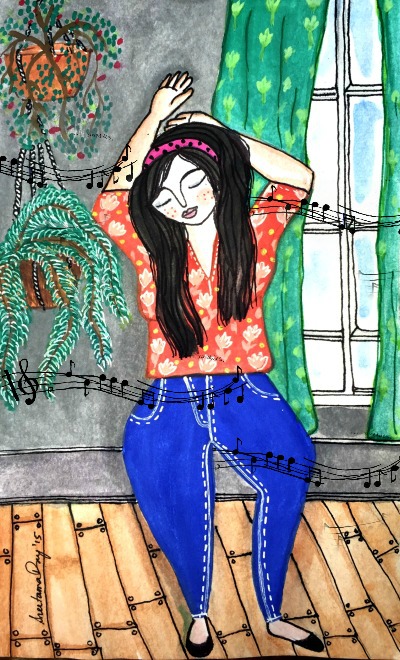 Back from my travel to Australia, which is a ridiculously beautiful country. Literally, the photos need no filters.

Friends and family pampered us no end with lunches and dinners and pretty presents all over the place. We were like Hollywood celebrities, leaving the airport at various cities in our big ass sunglasses and being scooped up by friends in their huge cars – no taxi queues.

The food in Australia was outstanding no matter where we were. So was the coffee. And the wine. And the beer.

We slept for 18 hours last night and this morning was all about swaying my hips to Nina Simone, while I made my coffee and looked through the hundreds of photos I took.

PS: There’s a new BUY MY WORKS button to the right side bar of the blog where you can, you guessed it, buy my works. Also, some changes to the Sketchbook Store page, so go check that out if you have time 🙂

It still feels like 1999 was yesterday. I finished high school and everyone was really concerned that the Y2K virus was going to end the world.

When I was in Calcutta for the holidays, my friends and I visited a bar we used to go to. Then someone said, remember? smoking was allowed here.

Of course I acted like I had no recollection of that time, seeing as it made me feel ancient. My other friends fell a bit silent too, as if trying hard to remember.

Then someone finally said it, we are THAT old?? It was a question, but no one answered it. We then ate our body weight in food and left.

My Ma is dusky. And if you’re Asian you know we really hate that shit. If you are light skinned, you’re beautiful. If not, tough luck.

My grandparents were very middle class, hard working people who gave their daughter a certain sensibility about life, but not too many fancy things. So she never ever wore any makeup other than a little kohl in her eyes and much later in life, when she gave up the kohl, some lipstick.

But, defying all that is traditionally beautiful, Ma was considered by many as having a certain ‘je ne sais quoi’. May be it was the thick black hair, or the dreamy eyes, or the beautiful singing voice, or the fact that she writes poetry. I don’t know.

This picture of her, which has recently surfaced on the Internet thanks to someone from my extended family posting a lot of old photos, was taken at my grandparents’ home, in the late 70s. The photograph was used to find her a match in an arranged marriage. After seeing this photo, a very rich man came to see her for his son. He had assumed from the photo that she was very fancy and stylish, and perhaps from a higher economic status than she was in reality.

He later said no to the arrangement, because, “kalo”. As in, dark-skinned.

Well, thank god, because that’s why I have my Baba :))

Excuse me, were you saying something about your low carb, low fat, low fun diet for the three extra pounds on your thighs? Sorry, I was too busy cradling my precious loaf of banana bread like a new born baby.

May your coffee be strong and your Mondays be short.

Copyrighted work: DO NOT STEAL

This work is licensed under a Creative Commons Attribution-NonCommercial-ShareAlike 3.0 Unported License.
Join 1,173 other followers